Attrition in the climate trenches

There are ongoing skirmishes on the climate battlefront.  They involve key ideas in climate science – climate extremes, climate sensitivity and the accuracy of climate models.  There is as well an ongoing quibble – recently revisited by “climate scientists” – about whether surface temperature has increased recently.  It is really quite obvious that if you start with the La Niña early in the century that it has.  Surface temperatures have not increased since 2002 – 0 to 700m ocean temps have not increased.  Deeper ocean sampling prior to 2005 was at less than 10% coverage – and temps at 0 to 2000m do seem to have increased since circa 2008 – as solar intensity increased.  It will get a little cooler as we pass the current solar cycle peak and move into a cycle trough over the next couple of years.  Climate extremes, climate sensitivity and the accuracy of models have interpretations that are not widely understood. 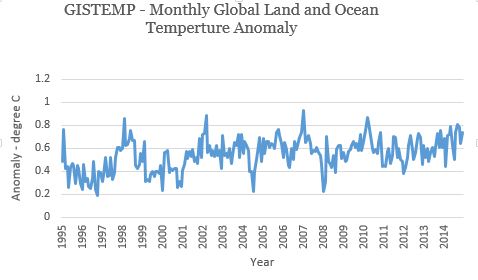 The more pressing problem is what we do about human pressures on climate and the environment.  The idea behind the Ecomodernist Manifesto is that economic growth and environment protection are compatible.  This was in fact the key conclusion of the Brundtland Report — Our Common Future — published by the United Nations World Commission on Environment and Development in 1987.  It was a message on sustainable development that I took to heart as a relatively young engineering hydrologist and environmental scientist — and have practiced professionally ever since.  Despite progress on the environment, excess economic development is now the problem in the view of many progressives.  The premise of the Ecomodernist Manifesto is that:

Intensifying many human activities — particularly farming, energy extraction, forestry, and settlement — so that they use less land and interfere less with the natural world is the key to decoupling human development from environmental impacts. These socioeconomic and technological processes are central to economic modernization and environmental protection. Together they allow people to mitigate climate change, to spare nature, and to alleviate global poverty.

It signals a new direction in the culture war that has been building momentum over the past few years — starting with The Wrong Trousers: Radically Rethinking Climate Policy in 2007, followed up in the 2010 Hartwell Paper and Climate Pragmatism: Innovation, Resilience and No Regrets in 2011.   It is a school of thought that will only increase in confidence and clarity.  My response is linked at the Ecomodernist site and available directly here.  The language of my modest contribution has been criticised as ‘flowery’ — it is quite deliberate and in a long tradition of the rhetoric of freedom.  This is a cultural clash for the hearts and minds of people and at stake is the future of the planet.

The alternative vision involves tales of the collapse of western civilisation and capitalism — leading to less growth, less material consumption, less CO2 emissions, less habitat destruction, and a last late chance to stay within the safe limits of global ecosystems.  And this is just in the “scholarly” journals.

Global warming progressives are right in one respect.  Economies are fragile — movements on markets can be fierce — recovery glacially slow sometimes. There are economic problems — but the problems are not intrinsic to capitalism. They were created by poor judgement.  We blundered into it through stupidity.  It is not difficult, however, to imagine scenarios in which markets are deliberately destabilised to hasten the end of capitalism. Creeping tax takes, overspending by government, printing money, keeping interest rates too low for too long, or too high for too long, taxing primary inputs, implementing market distorting subsidies — the scope is endless. These are suspiciously the objectives of global warming progressives — but let’s not call it a conspiracy.

Climate extremes play into a political rhetoric surrounding climate change – although to what purpose is not clear.  Barack Obama’s thoughts on the Syrian drought are a recent example.  My piece Obama and the Syrian Drought aired at American Thinker to Christian acclaim.  It uses 1300 year Nilometer records and a Holocene spanning El Niño — Southern Oscillation proxy to suggest that the biblical Joseph was much better at hydrological prognostication than President Obama.  Whatever the proximate cause — global hydrological and climate variability – extreme drought, extreme floods and extreme temperature changes such as has not been seen in the 20th century will occur again.

The solution, such as it is, is to build prosperous and resilient communities.  As Joseph tells us — to avoid catastrophe in the times of need requires a wise and honest person to manage things in the times of abundance.

Is climate sensitivity high or low? Michael Ghil, Distinguished Research Professor of Atmospheric and Oceanic Sciences, University of California, Los Angeles (UCLA), suggests that there is a third possibility — both high and low.  The diagram below shows the results of a so-called one-dimensional (1-D) climate model.  The model uses simple climate equations that interact and behave in complex ways. 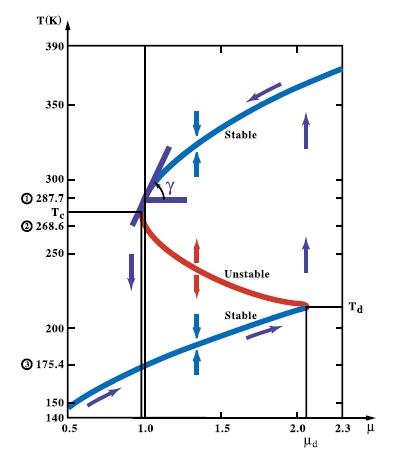 Ghil’s model shows that climate sensitivity (γ) to any of a number of factors is variable.  It is the change in temperature (ΔT) divided by the change in the control variable (Δμ) — the tangent at a point to the curve shown above.  Sensitivity increases moving down the upper curve to the left toward the bifurcation and becomes arbitrarily large at the instability.  The problem in a chaotic climate then becomes not one of quantifying climate sensitivity in a smoothly evolving climate, but one of predicting the onset of abrupt climate shifts — whatever their cause — and their implications for climate and society.  They involve shifts in atmospheric and ocean circulation and seem to have happened at 20 to 30 year intervals — for entirely natural reasons — for the millennia for which we have detailed enough proxies. The last shift in 1998/2002 involved an increase in cold and nutrient rich upwelling in the eastern equatorial Pacific that increases biological productivity, changes global hydrology and cools the planetary surface.

Nassim Taleb and colleagues prompted thoughts on another bone of contention.  In a recent article — Climate models and precautionary measures — it is contended that the climate debate is about the accuracy or otherwise of climate models.  Those who believe in climate models argue for specific but unspecified precautionary policy.  Those who hold models to be inaccurate — they say — believe that there is no proof of harm sufficient to warrant action.  As a chain of reasoning it breaks at the very first link.  Models are known without a doubt to be inaccurate.  It is called ‘irreducible imprecision’ and has been known about since Edward Lorenz plied his convection models in the 1960’s.  Models can have slightly different starting points as a result of uncertainty in inputs.  Many solutions are thus possible for a single model that diverge exponentially over the calculation period.  Irreducible imprecision is shown in the diagram below.  It is from a paper by Julia Slingo — head of the British Met Office — and Tim Palmer — head of the European Centre for Mid-Range Weather Forecasting.

It adds up to a conclusion you may find very surprising — and you get points for guessing which denier said this.  “In sum, a strategy must recognise what is possible.  In climate research and modelling, we should recognise that we are dealing with a coupled non-linear chaotic system, and therefore that the long-term prediction of future climate states is not possible.”  It means that most of “the science” — the data interpretation, the methods and the theories are utterly inadequate to the task of explaining climate for us.  But both sides of the climate battle continue to insist on a certainty that is impossible – and continue a battle in which one side is heavily outgunned.  The climate change battalion is all of the global scientific institutions, the liberal press, governments, major scientific journals, etc. Opposed is a ragtag collection of a few marginalized cheer leaders for curmudgeons with crude and eccentric theories they insist is the true science.  The curmudgeons are remarkably persistent – and climate shifts may give them a strategic advantage as the planet doesn’t warm over the next decade or two.  The battle is absurd and unwinnable – by either side.

The rest of us are concerned that the real objectives of humanity are not lost sight of.  It is simple in principle to take the initiative on the broad front of population, development, energy technology, multiple gases and aerosols across sectors, land use change, conservation and restoration of agricultural lands and ecosystems and building resilient communities.  What we really want is much more clarity on effective policy responses – a focus on the real issues of global economic progress and environmental protection.  Emissions of greenhouse gases or loss of biodiversity are far from intractable problems — but economic growth is the foundation of any practical measures.

1 Response to Attrition in the climate trenches