Rivers of gold go up in smoke

The COP21 greenhouse gas commitments – with the best will in the world and US$13.5 trillion – result in an increase in energy emissions to 2030 of 3.7 billion metric tons of CO2(1). As formulated it is all smoke and mirrors – a magic show reliant on misdirection.   Emissions have increased by 10 billion tons since the Kyoto Protocol was ratified.  Rivers of gold have been squandered for little return.  Rather than continuing to go with the flow – it is more than time to review and reflect and splash out in a new direction.  With a fraction of the US$13.5 trillion we could do much to solve the world’s problems – and mitigate greenhouse gases at the same time.

The Intergovernmental Panel on Climate Change in 2013 estimated that cumulative carbon dioxide emissions from fossil fuels and cement production – from 1750 to 2011 – was about 1340 billion metric tonnes as carbon dioxide equivalent (GtCO2-eq) with another 660GtC from deforestation and agriculture. Of this 2000GtCO2-eq, about 880GtCO2-eq (44%) had accumulated in the atmosphere, 560GtCO2-eq (28%) had been taken up in the oceans with slight consequent acidification, and 560GtCO2-eq (28%) had accumulated in terrestrial ecosystems.  Aiming to re-sequester 50% of the carbon loss in agricultural soils and forestry is a reduction in atmospheric carbon dioxide of 42 parts per million.

Energy emissions occur over a number of sectors. Electricity generation is 37% of the total. Cost effective technologies will emerge by fits and starts over decades and will rapidly replace existing plant. Politicians are almost entirely irrelevant – it is far more the province of industry and entrepreneurs –  and the market forces that drive business. 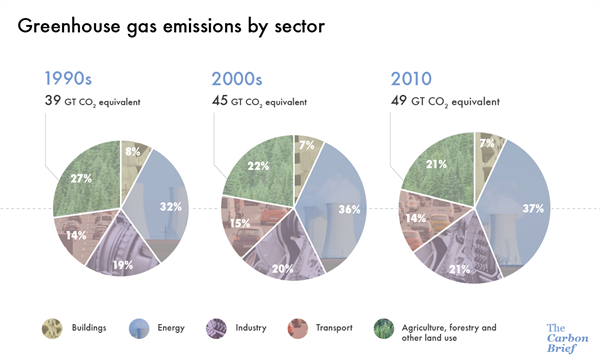 The building sector includes combustion of natural gas and petroleum products for heating and cooking needs.  This sector includes organic waste sent to landfills which emits methane as well as methane and nitrous oxide from wastewater treatment plants and the release of fluorinated gases (mainly hydrofluorocarbons, or HFCs) used in air conditioning and refrigeration systems.  The energy sector includes gases from electricity generation used for power and heat. Industry includes process heat for concrete, steel and aluminium smelting, brick firing, etc.  Transport is – of course – trains, boats, planes and automobiles.  Emissions from agriculture and forestry include methane, nitrous oxide and carbon dioxide from biomass decay, ruminant digestion and soil carbon and nitrogen oxidisation.  The total release of CO2 from agriculture since 1850 is 600 billion metric tons of some 2000 billion tons of anthropogenic greenhouse gas emissions.  The deforestation contribution is declining as populations stabilise and with increased productivity – less land use – in agriculture.

Low carbon liquid fuels are relatively easy to produce.  Audi believe that they can scale up to produce fuel – diesel in the schematic below – at about US$3.84 to US$6.15 /gallon.  All that is needed is an electricity source to split hydrogen from water, concentrated CO2 captured from air and a catalyst.  Here the intermittency of wind and solar may not be such a big factor and the race may be on between the falling cost of wind and solar power and the efficiency of high temperature electrolysis possible with small, modular nuclear reactors (SMR). 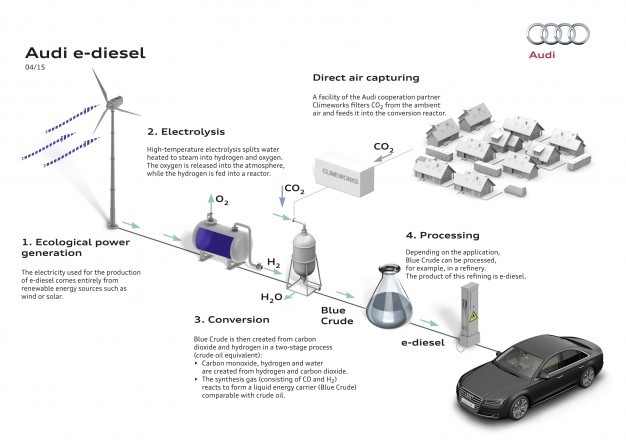 SMR can supply base load power.  Thankfully these designs – which will be rolling out of factories within a decade – are a far cry from conventional reactors.  They use as fuel most of the energy from conventional waste, depleted uranium, thorium or unenriched uranium.  Essentially unlimited energy.  They can’t melt down.  The waste stream is only 3% of that of conventional reactors and is cool in 300 years.  General Atomics expects its Energy Multiplier Module (EM2) to be competitive with gas generation in the US at a gas price of US$6 to US$7/million British Thermal Units (mMBtu). 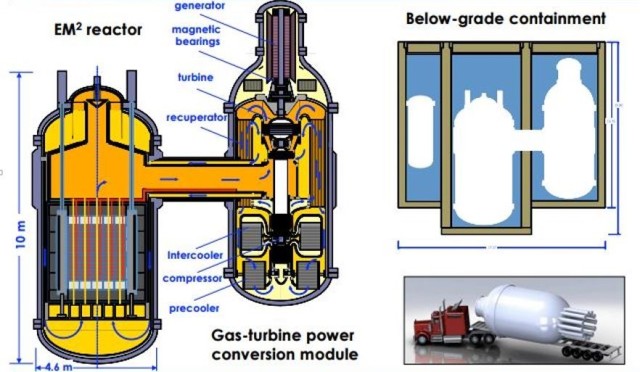 With cost competitive liquid fuels, electricity sources and process heat – and they will be competitive within a decade as oil and natural gas prices increase – a transition to a low carbon economy seems inevitable over the next few decades.  Consumers are likely to demand it.

In the meantime there continues to be massive declines in wildlife populations, soil health, food security and community resilience. Even if it were true that climate was moving outside the limits of natural variability – and it isn’t even close to true(2) – then there is a far more effective way reducing atmospheric CO2 while addressing biodiversity, population, development, food security and soil and water conservation. Regenerative agriculture has the potential to remove 300 billion tons of carbon dioxide from the atmosphere. This is carbon that been lost from grazing and cropping lands under conventional agricultural.   A cost of US$13.5 trillion for a 3.7 billion ton increase in emissions compares to the pittance required for sequestering 300 billion tons.

Increased agricultural productivity, increased downstream processing and access to markets build local economies and global wealth. Economic growth provides resources for solving problems – conserving and restoring ecosystems, better sanitation and safer water, better health and education, updating the diesel fleet and other productive assets to emit less black carbon, developing better and cheaper ways of producing electricity, replacing cooking with wood and dung with better ways of preparing food thus avoiding respiratory disease and again reducing black carbon emissions. The warming potential of black carbon is equal to that of carbon dioxide emission from electricity production – but is given little attention in the public sphere. A global program of agricultural soils restoration is the foundation for balancing the human ecology. In this international year of soils – France has committed to increasing soil carbon by 0.4% per year. As a global objective and given the highest priority it is a solution to critical problems of biodiversity loss, development, food security and resilience to drought and flood.

Overshadowed in Paris and neglected by most politicians and pundits is a plan to have a billion hectares of agricultural land under regenerative agriculture by 2030.  Advancing this with a fraction of the US$13.5 trillion dedicated to smart development goals – which include agriculture and reforestation – would be a truly inclusive and inspiring project.

(2)  “Recent scientific evidence shows that major and widespread climate changes have occurred with startling speed. For example, roughly half the north Atlantic warming since the last ice age was achieved in only a decade, and it was accompanied by significant climatic changes across most of the globe. Similar events, including local warmings as large as 16°C, occurred repeatedly during the slide into and climb out of the last ice age. Human civilizations arose after those extreme, global ice-age climate jumps. Severe droughts and other regional climate events during the current warm period have shown similar tendencies of abrupt onset and great persistence, often with adverse effects on societies.” National Academy of Sciences, Committee on Abrupt Climate Change, 2002, Abrupt climate change:  inevitable surprises, National Academies Press