Stocks and flows in the Earth system

Stocks and flows exist at the cellular to planetary scales.  Stocks are an accumulation of some sort.  It may be water, heat or biomass.  Water, heat and populations ebb and flow.   Mass and energy are conserved.  Water and heat can thus be treated as elemental calculus entities.  Populations may need equation free prediction

With root zone water storage – the change is the gains and losses above and deep percolation loss below.  The root zone should be full of fungi, worms, nematodes, etc.  That facilitates breakdown of substrate to release nutrients – and intercepts, infiltrates and stores rainfall.  Good for dry weather flow, aquifers and reducing sea level rise – as much as that is.  And good to sequester 80 GtC (Rattan Lal).  Even more with reclaiming desert and restoring rangeland and woodland.

So let’s get exciting.  The oceans are the global heat store – 92% of total as compared to 4%  in water and vapor – and 4%  in the atmosphere – much at the surface as  latent heat.   The oceans warm or cool to 100 odd meters with sunlight, heat is transported on currents and eddies to depth and returned to the surface by convection.  Warmer surfaces emit more energy – to the fourth power of temperature – strong Earth system stabilization.  The energy flow interacts with the atmosphere on its way out to space.  At the edge of the atmosphere there is only radiant energy – in and out – through a window that includes bi-stable and nonlinear closed and open cell cloud.  Closed – high albedo – cells persist for longer in a cooler atmosphere caused by cooler ocean surfaces.  Convection cells rise in the atmosphere to a cooler level and rain out – leaving an open cell – from the centre given the presence of nucleating aerosols and sufficient internal kinetic energy.

“Marine stratocumulus cloud decks forming over dark, subtropical oceans are regarded as the reflectors of the atmosphere.1 The decks of low clouds 1000’s of km in scale reflect back to space a significant portion of the direct solar radiation and therefore dramatically increase the local albedo of areas otherwise characterized by dark oceans below.2,3 This cloud system has been shown to have two stable states: open and closed cells. Closed cell cloud systems have high cloud fraction and are usually shallower, while open cells have low cloud fraction and form thicker clouds mostly over the convective cell walls and therefore have a smaller domain average albedo.4–6 Closed cells tend to be associated with the eastern part of the subtropical oceans, forming over cold water (upwelling areas) and within a low, stable atmospheric marine boundary layer (MBL), while open cells tend to form over warmer water with a deeper MBL. Nevertheless, both states can coexist for a wide range of environmental conditions.”  (Koren 2017) 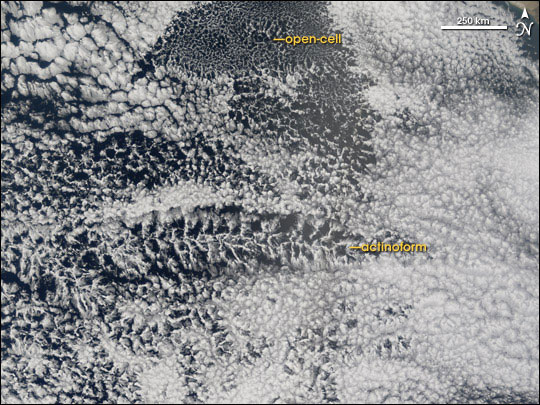 “Off the west coast of South America, an intricate network of clouds presented a spectacular view to the Moderate Resolution Imaging spectroradiometer (MODIS) on NASA’s Terra satellite when it flew overhead on September 30, 2005.”  https://earthobservatory.nasa.gov/images/5904/cloud-formations-off-the-west-coast-of-south-america

Cooler ocean surfaces arise from upwelling of cold and nutrient rich water on the eastern Pacific margin.  Upwelling in both the north and south has variability over months to millennia – driven by solar butterflies and polar annular modes over much of the global ocean tropics.

“These natural climate phenomena can sometimes hide global warming caused by human activities. Or they can have the opposite effect of accentuating it.” Josh Willis

There are modes of a warmer or cooler Pacific Ocean – related to cold, deep ocean upwelling on the eastern margin that waxes and wanes on scales of days to millennia.

“El Niño/Southern Oscillation (ENSO) is the most important coupled ocean-atmosphere phenomenon to cause global climate variability on interannual time scales. Here we attempt to monitor ENSO by basing the Multivariate ENSO Index (MEI) on the six main observed variables over the tropical Pacific. These six variables are: sea-level pressure (P), zonal (U) and meridional (V) components of the surface wind, sea surface temperature (S), surface air temperature (A), and total cloudiness fraction of the sky (C).”  https://www.esrl.noaa.gov/psd/enso/mei/

On the theory that the Pacific window closes with more upwelling and opens with less – cumulative changes in MEI are a proxy for ocean temperature change – as palely reflected in global surface temps.

It bears out something that has been understood for some time – decadal to millennial variability in a climatologically significant subsystem.  As of January 2020 the Pacific state is holding – still not doing anything much.   As a forced charge/discharge oscillator – the next major event seems likely to be La Niña.  With more southerlies busting up the South American coast and curling out at the equator to cross the Pacific– I’m predicting it sooner rather than later.  Beyond that is perpetual hydrology and climate variability that seems to get worse the longer the data series (e.g. Koutsoyiannis, 2015).