Here’s an infographic you may be aware of.  Assume for a moment that greenhouse gases are bad.  Actually – I’d assume that climate is a wild and angry beast – as the Godfather of Climate Science said long ago.  Great and unpredictable fluctuations in temperature and hydrology – megafloods and magadroughts such as we have not seen in the 20th century – will occur again for reasons that may be entirely natural.  The solution, such as it is, is to build prosperous and resilient communities.  This suggests to me that taxes and caps on more or less of the western worlds share of the 64% of greenhouse gas emissions that are fossil fuel sourced – is contra-indicated.  But you may assume that greenhouse gases are bad. 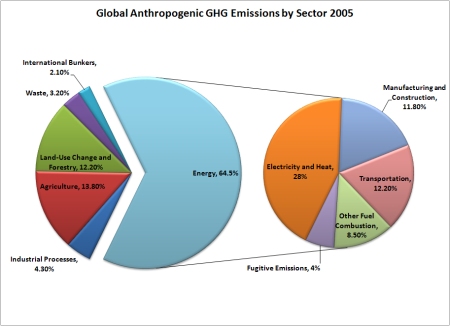 The very diversity of sources says that a diversity of technologies is required to turn things around.  The situation is further obscured – to make a pun – by the emissions of black carbon particulates.  Accounting for all climate effects, black carbon is believed to have a warming effect of about 1.1 Watts per square meter – some two thirds of the effect of burning fossil fuels.  Significantly higher than emissions from electricity generation plus transport fuels.

What is needed are alternative sources of electricity and liquid fuels.  Alternatives that are cost competitive in developing economies.  It is a matter of complete indifference to me whether western nations increase power and fuel taxes.  It is a matter for the cut and thrust of politics.  Most of us after all already pay significant levels of taxation on energy.  I am less indifferent to the prospect of it being the sole focus of discussion over several more decades.

The Copenhagen Consensus smart energy targets may serve as an alternative point of departure and – like the complex systems of climate models – we may end up at a radically different end point.

The first is cheap at twice the cost – but I am far less inclined then the Breakthrough people to think that government is best able to pick technology winners.  The best way to do it is to leverage private investment with generous write-offs for energy investment.  Until there are good alternatives for power and liquid fuels – substantial progress on the 64.5% of emissions from fossil fuels is unlikely – especially in the developing world.

The second item provides a clue as to a way of moving quickly on climate forcing from black carbon.  I’ve suggested solar cookers and Biolite stoves – far from perfect but a way to reduce the health burden and charge phones.

The third – well who is in favour of subsidies?

Managing the other sources requires a suite of improved management prcties on agricultural land – especially the restoration of degraded ecosystems and grazing lands.  This is the single biggest opportunity for carbon sequestration.  We are calling it 5 billion hectares of hope.