ENSO (El Niño Southern Oscillation) variability is linked to the spinning up or down of the South Pacific gyre – as it brings more or less cold Southern Ocean water northward – along the Peruvian coast – to more or less displace warm surface water and initiate upwelling.  This in turn is influenced by sea level pressure patterns in polar and subpolar regions – as more or less wind and currents are pushed north (Roemmich et al, 2007, Qiu, Bo et al 2006).   A pattern known as the Southern Annular Mode (SAM).  SAM is influenced by the warming and cooling of ozone layers as solar ultraviolet radiation waxes and wanes (Petrick et al 2012).  The deterministic mechanism is a chain of dynamical causality linking small solar changes to large climate variability.

In a positive SAM event sea level pressure over the pole is relatively low and pressure at sub-polar regions relatively high.  This is more likely at solar maximums when the ozone layer is warmer.  The circumpolar belt of strong westerly winds – and storm fronts – are confined to more southerly latitudes.  Conversely, a negative SAM event pushes storm fronts further north.  In Australia a negative SAM gives cold and blustery winters over southern regions.  A negative SAM spins up the South Pacific gyre transporting cold Southern Ocean water north and facilitating upwelling on the Peruvian coast.

ENSO is the most prominent cause of temperature, ecology and rainfall changes in the Earth system.  It is an oscillation between La Niña and El Niño states.  The cycle begins with cold water rising in the equatorial region of the Pacific Ocean.   This sets up feedbacks in wind and currents that propagate cold water upwelling across the equatorial Pacific.  When ENSO is in La Niña, the Pacific trade winds blow true and strong causing sun warmed surface water to pile up against Australia and Indonesia.  In an El Niño, the trade winds falter and warm water spreads out eastwards across the Pacific Ocean.  La Niña cool the planet and El Niño warm.

Moy et al (2002) present the record of sedimentation shown below which is strongly influenced by ENSO variability. It is based on the presence of greater and less red sediment in a lake core. More sedimentation is associated with higher rainfall in El Niño. It has continuous high resolution coverage over 12,000 years. It shows periods of high and low ENSO activity alternating with a period of about 2,000 years. There was a shift from La Niña dominance to El Niño dominance 5000 years ago that was identified by Tsonis 2009 as a chaotic bifurcation – and is associated with the drying of the Sahel. There is a period around 3,500 years ago of high ENSO activity associated with the demise of the Minoan civilisation (Tsonis et al, 2010). It shows ENSO variability considerably in excess of that seen in the modern period.

Vance et al 2012 devised a 1000 year record from salt content in an Antarctic ice core.  More salt is La Niña as a result of changing winds in the Southern Ocean.  It revealed several interesting facts.   The persistence of a 20 to 30 year pattern.  A change in the period of oscillation between El Niño and La Niña states at the end of the 19th century.  A 1000 year peak in El Niño frequency and intensity in the 20th century which resulted in uncharacteristically dry conditions in Australia since 1920. 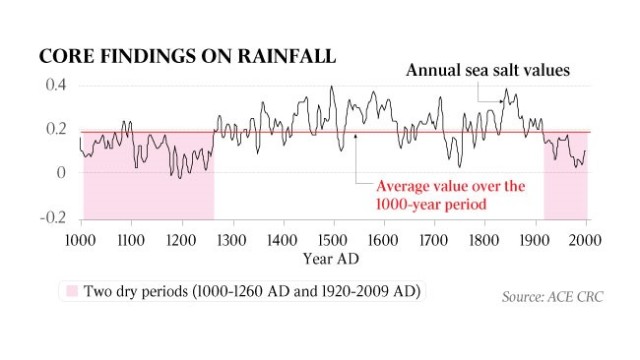 There is a similarity between global temperature records and solar activity over a thousand years that has always intrigued.

“Since irradiance variations are apparently minimal, changes in the Earth’s climate that seem to be associated with changes in the level of solar activity—the Maunder Minimum and the Little Ice age for example—would then seem to be due to terrestrial responses to more subtle changes in the Sun’s spectrum of radiative output.”  Goode et al 2007

Goode, P.R. and Palle, E. 2007. Shortwave forcing of the earth’s climate: Modern and historical variations in the sun’s irradiance and the earth’s reflectance. Journal of Atmospheric and Solar-Terrestrial Physics 69: 1556-1568.

2 Responses to Working Backwards – from ENSO Variability to Solar Causality